Passing the Torch of Leadership

We are in a little rural town of called Estancia in New Mexico. It’s dark, and it’s cold. So we huddle together in a small adobe hut, waiting.

Eventually, we hear a car on the gravel outside, and then the cheerful voice don Alejandro, a well-respected Elder of the Mayan people. He’s an older man, and quite small. Wearing a wry smile, he enters the hut and walks into the embracing arms of our host, Grandmother Flordemayo of the Council of 13 Indigenous Grandmothers. 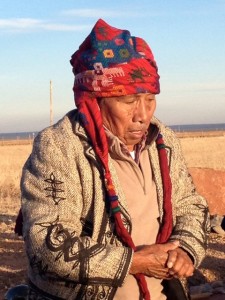 Don Alejandro begins to share with us about this crucial period in history. It’s the end of a 5,200 year calendar cycle for the Mayan people. And while the outside world is filled with fear and concern about the end of this era, don Alejandro shares a different perspective.

“So, what should we expect with the end of this era and the beginning of a new one,” I ask him. He explains that there is no reason to be afraid, though he does admit there will probably be some major issues we must face in the next fifty years. But from his perspective the biggest change has to do with the shift from masculine to feminine leadership. He explained that men have ruled for the last 5,200 years, and now it’s time for the men to support the women in our full power.

Though we don’t all know it yet, we are gathered for a very important ceremony. And very soon, all the men at our gathering would be meeting separately to plan this ceremony, in order to symbolically transfer the staff of power from the men to the women.

This event, totally orchestrated by the men of many different backgrounds, was totally unexpected for me, and so beautiful.

At the time of the ceremony, we were greeted by Marshall Jack, a Native American elder who played his drum to call us all into the ritual space. The could hear sweet sound of native flute hanging in the air. And we were each escorted around an outdoor sacred circle by Sequoia Trueblood, another Native elder. He placed each of us onto a grid of energy marked on the Earth, and gave us each a simple bouquet of flowers to celebrate this transition.

As the drum sounded in a heart-beat rhythm, Mr. Jack spoke with a deep, resonant cadence that was a balm for my soul. He apologized deeply, from his heart, for the ways women have been disregarded and disempowered. He asked for forgiveness for atrocities like the Inquisition. He said “No MORE! Those days are over, and shall NOT come to pass again!” He asked for the support of all of our ancestors to cleanse the wounds we had each suffered as women.

I felt a tear well up in my eye and roll down my face. To hear these words from such a kind and generous older man struck a very deep chord. Blessings were shared by the women and men alike.

And then the men declared that it is women’s turn to lead this planet. And they gently passed Flordemayo, as a representative for the women, a hand carved wooden staff of power, carefully crafted for this occasion. The staff was simple and about the length of my forearm. It was a bit smaller than I would have imagined for such an occasion, but it was beautiful. And it was swaddled with many colorful pieces of yarn which accompanied the ceremony and absorbed its blessing power. 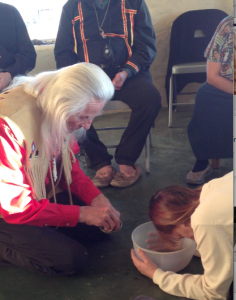 At the end of the ceremony, each woman present was asked if she was willing to take-on a “clan” for the coming era. Those of us who answered “yes” were each declared a “Clan Mother” were given a thread from this Mother staff. I decided to take up the charge, along with other women. We were then each invited to create our own daughter staffs and to cultivate our “tribes” of women and men. We were encouraged to circle with others and to empower other Clan Mothers through time. And it was suggested that we each register our new clans at an official office for tribal recognition.

As I carry this deep blessing from the men in my heart, I am reminded of a phrase spoken by Marianne Williamson when I interviewed her for our Inspiring Women Summit. She said (paraphrasing) “Women have the power. Now we must be willing to USE OUR POWER.” Indeed.

I would add that we must use our power WISELY. It’s not about trying to turn the tables, toss out the men, and have female dominance everywhere.

No. In my opinion, such a stance will not heal our hearts and create a thriving planet. That would instead just be a recapitulation of an old paradigm.

This new era, marked by the end of 2012, is about creating true balance of the masculine and the feminine. And let us not forget that men too can cultivate a strong feminine energy, while most women in leadership roles today have plenty of masculine energy. So let this next era of 2013 be a time when we really explore how to harmonize these energies for the greatest good.

I welcome and look forward to this experiment. And I know many men do as well.